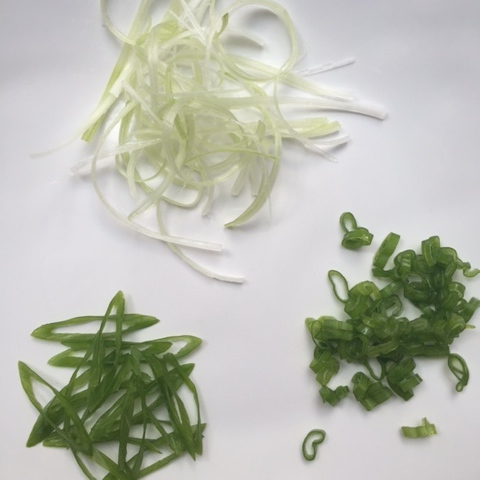 Scallions (also known as green onions) are crunchy vegetables that have long green stalks and small white bulbs. Scallions can be eaten raw or cooked, and they have a very mild onion flavor, compared to shallots or other onion varieties. Most individuals who are familiar with scallions know that slicing one is very straightforward. However, knowing a few other ways to slice them can turn scallions from an everyday vegetable to a beautiful garnish. So here’s how to slice a scallion three ways!

1) Crosswise
First lay one scallion stalk horizontally on a cutting board. Starting at the top end of the stem, begin to make parallel slice with your knife. You can make the slice size as big or as small as you wish, but a smaller slice will provide a less intense onion flavor. Continue to make small cuts down to the white portion of the scallion and stop. The dark and light green parts of the scallion are best for this type of scallion slice. And that’s it!

2) Lengthwise
Now that only the bulb and white parts of the scallion remain, you can cut this section as well (only in a different way). Start by cutting off the bulb/root end. Next, make a cut lengthwise, from top to bottom, about halfway through the scallion. DO NOT CUT ALL THE WAY THROUGH! You want to make scallion “sheets” by opening up the scallion to show its many layers. Now that the scallion is open and all the layers are exposed, cut thin, julienne size slices vertically from top to bottom. Once all the scallions have been cut, soak the slices in cold water for 5 to 10 minutes to remove extra dirt and slimy film between the scallion’s layers. Dry on a paper towel (the slice will begin to curl) and enjoy!

3) On a Bias
Grab another scallion stem and lay it vertically on a cutting board (bulb end closest to you). First cut off the bulb and discard. Working from the bulb end, begin to cut the scallion with your knife at a 45 degree angle (slanted/diagonal/on a bias). The scallion slices will be slanted and almost in the shape of a long diamond. You can make them as short, long, thin or wide as you please, depending on the angle of the knife to the scallion. Again, the smaller the slice, the less intense onion flavor. It’s easy as that!

Chef by day, blogger by night, I'm a 20-something living and working in the big apple.